Home > Who We Are

The CJTF is a public tax-exempt charity organization formed under the Internal Revenue Code (IRC) Section 501(c) (3) (Tax ID 84-3200421) whose mission is to foster educational awareness seminars in Triple Negative Breast Cancer and Science, Technology, Engineering and Mathematic (STEM). It is also qualified to receive tax deductible bequests, devises, transfers or gifts to support scholarships for graduates and honorariums to health experts who bring areas of instruction in emerging and/or current clinical practices for treating triple negative breast cancer within our local communities and our nation in accordance with any future federal tax codes or laws.

A native of Hampton, VA and graduate of Hampton High School, Tonya Byrd earned her bachelor’s degree in Mechanical Engineering, magna cum laude, from Howard University in 1998. While at Howard, she became a member of both Tau Beta Pi – The National Engineering Society and Alpha Kappa Alpha Sorority, Inc., the first sorority founded for African-American women. Following the completion of her undergraduate studies, she obtained an M.B.A. from The George Washington University in 2000 concentrating in Management of Science, Technology, and Innovation. In her 27th year with Dominion Energy, Tonya is Supervisor, Electrical Distribution Design overseeing design teams in both the Hampton and Williamsburg offices. Prior to this position, she worked as an Engineer and Sr. Nuclear Training Instructor at Surry Power Station and as a Supervisor, Customer Account Management in Norfolk, VA.

No matter whether at work, or in her spare time, Tonya has a strong focus on STEM education, volunteerism & community engagement, and diversity & inclusion. In 2008, Tonya was selected as a fellow to attend the prestigious World Nuclear University Summer Institute held that year at the University of Ottawa, Ontario, Canada. Each year, the Summer Institute selects 100 nuclear professionals from across the world between the ages of 27 and 37 who demonstrate strong leadership potential. Four years later in 2012, she was featured in the Black Engineering Magazine in an article titled, “Notable Blacks in Energy: They’ve Got the Power” by Frank McCoy. And more recently in 2019, Tonya was selected by Dominion Energy as the Benjamin J. Lambert III Volunteers of the Year – Community Vitality. Currently, Tonya serves as Chair of Dominion Energy’s African American Resource Group (AARG) – Corporate Chapter and Honorary Co-Chair of the 3rd Annual United Negro College Fund (UNCF) Hampton Roads Mayors’ Masked Ball.

Tonya serves on the board of the Cheryl Jackson Tyler Foundation, Inc., on the UNCF Richmond’s Southern Virginia Leadership Council, and is an active member of the Alpha Kappa Alpha Sorority, Inc., Lambda Omega Chapter in Newport News, VA where she serves on the HBCU for Life committee. She is also active with the American Association of Blacks in Energy – Virginia Chapter and the Howard University Alumni Association – Hampton Roads Chapter. She attends Relate Church in Portsmouth, VA.

Zerline Chambers-Kersey, MD runs a state-of-the-art women’s health and aesthetic medicine practice located in Dumfries, Virginia. Dr. Zerline Chambers-Kersey is a gynecologist, obstetrician, and cosmetic expert with more than 30 years of experience, and serves the needs of patients in and around the greater Prince William County area.

Dr. Chambers-Kersey and her first-rate team have created a truly caring environment that welcomes women of all ages and backgrounds. In addition to providing a complete menu of gynecological and obstetric services, including annual wellness exams, disease screenings, basic infertility evaluation and treatment, and prenatal care and delivery, the practice also offers an ever-growing list of cosmetic services, including laser skin resurfacing and laser hair removal treatments.

Dr. Chambers-Kersey recognizes that women’s health care is a very personal experience and that choosing the right provider is one of the most important decisions you can make. That’s why she strives to make every appointment as comfortable as it is productive so that you can feel secure and confident in her care.

Eric Jackson is married to Ellen Jackson and has two beautiful daughters Selena and Karina Jackson. He is a former Police Supervisor with the Prince William County Police Department and a former Director of Operations with an International Security Company. Currently, he is a Duty Supervisor with a major domestic airline. Eric Jackson is an active member of Dale City Christian Church. Being the bother of Cheryl Jackson Tyler, Eric proudly serves as a Board Member of CJTFoundation. In his leisure, Eric is an aviation enthusiast. 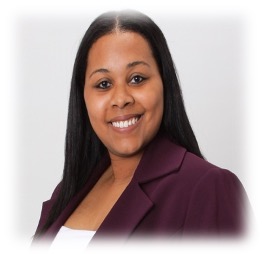 Dominique Lynnette Sparks is an attorney that dedicates her life to fighting civil rights and serving her community. Her favorite quote is from the great Mahatma Ghandi, “the best way to find yourself is to lose yourself in the service of others.” Dominique has always had a passion for helping others and being the change, she wanted to see in her community. Dominique’s journey to law started when she was in high school at C.D. Hylton High School in Woodbridge, Virginia.

In addition to these various school activities, Dominique volunteered at the Hampton Roads Community Center where she mentored and helped with aftercare for the middle and high school students. Dominique’s honors include Deans list, Golden Key Honor Society, and President Award finalist. Additionally, Dominique was awarded the Pi Sigma Alpha Political Science Honor Society Award at graduation for her academic accomplishments in the political science department. She was also presented as a Law Fellow for the Hampton University Pre-Law Program. During Dominique’s matriculation through Hampton she had amazing opportunities working for various politicians including Congressman Robert “Bobby” Scott of the 3rd Congressional District of Virginia, Senator Mark Warner, Delegate Mayme BaCote, and Virginia State Senator Maime Locke. These opportunities gave Dominique a plethora of insight into the intricate details of Capitol Hill and state government.

Upon graduation from Hampton University, Dominique attended North Carolina Central University School of Law (NCCU), where she graduated with her Juris Doctor in May of 2019. While at NCCU, Dominique was the Dime Initiative Event Planner, Themis Bar Representative, Environmental Law Review Staff Editor, Women’s Law Caucus member and Phi Alpha Delta Law Fraternity member. While in law school, Dominique had the honor of being selected as a legal fellow by Congressman Butterfield through the Congressional Black Caucus to work for Congresswoman Marcia Fudge, who represents the 11th Congressional District of Ohio. Within the Durham community, Dominique volunteered with the Pro Bono Income Taxpayer Clinic, was a student attorney for Abuse, Neglect and Dependency and Family Law Clinic, these clinics help low-income families in need of legal advice. In 2019, Dominique was awarded the North Carolina Central University Professional Student Service Impact Award and North Carolina Bar Association Pro Bono Service Award for her exemplary community service in Durham throughout her law school career. Additionally, Dominique was honored to be on the Dean’s list throughout her law school matriculation

Dominique successfully passed the District of Columbia Bar Exam on her first attempt in July of 2019 and was sworn into the District of Columbia Bar on January 24, 2020. She now works for CACI International, Inc as a contractor for the Department of Justice Office of International Affairs. She currently serves as the Secretary for the Cheryl Jackson Tyler Foundation. Dominique has attended Dale City Christian Church all her life and is heavily involved. She is the assistant director of the dance team and volunteers with the Dale City Christian Church Multicultural Scholarship Fund. Additionally, Dominique serves on the advisory board for Minister Beverly Johnson’s Music and Ministry Scholarship Fund. Her favorite bible verse is found in Colossians 3:23 “Whatever you do, work at it with all your heart, as working for the Lord, not for human masters.”

If you desire a special presentation or visit or online training session of the Foundation, please contact us